Nuclear power is nothing new.

In fact, countries have been running nuclear programmes for decades.

The animation pans to the right, following the timeline of circles. Now three more circles appear, again all connected by a thin blue line. The first circle shows a reprocessing plan with the year 1992 and caption “Commissioning of THORP reprocessing plant in Sellafield.” The second circle shows the skyline of Kyoto with the year 1997 and caption “Kyoto Protocol adopted in first steps to global climate action.” Finally, the third circle shows a globe with the text “2657 TWh worldwide” over it. The year says 2019 and the caption “Generated 2657 TWh of power worldwide.”

Producing energy that’s cleaner and greener since the 1950s.

The timeline ends, shifting to a visual of a rocket blasting off into the camera. The smoke behind the rocket dissipates, revealing a scene of a chef in a kitchen.

A chef stands in a kitchen in front of a stove. She is wearing a chef’s hat and shirt with a blue atom on it. On the countertop in front of her is a yellow bowl, which she drops a giant atom in.

The chef drops a grey circle with the letter “U” on it to represent uranium.

The chef puts the yellow bowl into the oven behind her and smiles.

Then leave to stand.

The oven opens, revealing a purple cake with an atom decoration on it.

See? A piece of cake.

The scene changes to the chef again standing in front of a blue background. She is holding a pencil. Suddenly, her chef costume changes to that of a scientist. She scribbles an equation on the background behind her.

And yet, how was the recipe for nuclear power created anyway? Enter nuclear data!

The animation changes to a vortex with letters and numbers of code floating around. Atoms and move through the vortex into the camera.

Our library full of information on nuclear reactions, bulging with intelligence from thousands of experiments over the past 70 years.

The animation changes to inside a room, where it shows a lightbulb in the centre of the screen. A hand reaches over to pull the cord on the bulb to turn it on. The lightbulb turns bright yellow.

Data we rely on to make decision every day – at times, without even realising it.

The animation zooms into the lightbulb, then zooms out to reveal the chef once again in her kitchen. On the counter is a yellow recipe book labelled “v.1.0.” She scribbles words into the book.

The recipe books quadruple before the chef. The clock on the wall behind her then starts to rapidly move forward in time. As it does, the chef ages and several more recipe books stack up on the counter. The text “50 years later…” appears on screen.

To today, when we’re still trying to perfect the recipe and make the process more efficient.

The chef makes an “ok” symbol with her hands and smiles, looking into the camera. The animation then changes to a dark blue background with several yellow and pink atoms floating around.

The animation changes to the chef standing in front of a bookshelf filled with lines of yellow recipe books. She places one recipe book into the shelf. The scene then zooms out, revealing rows upon rows of similar bookshelves.

The results, added to our evaluation process to improve our reference library.

The animation changes to a scene of inside a nuclear reactor.

And why? Because it is crucial to energy system prediction.

The animation changes to a scene of houses at night-time. They sit in front of mountains in the background. The windows in each house are lit up in yellow.

Which is crucial to future energy production.

The animation zooms out to a view of the entire planet in outer space.

The animation changes to lines of code moving vertically along the screen. The following text appears as the narrator reads it aloud:

What exactly is this data, then, and why do we need it?

Cake, anyone? In fact, let’s try two pieces. The first is way too salty.

The cake on the left suddenly drops, becoming flat.

While the second tastes much better.

The team on the right rejoices while those on the left slump, looking disappointed.

It’s worth experimenting with recipes or we never learn. Although since we know what salt is, we can make a prediction.

Suddenly the teams are int eh same room, this one blue. The good cake grows in size before them, becoming three tiers with an atom on top. All three teams gaze at it in awe.

It’s the same when we create nuclear energy. By knowing what to put in, we can expect the best out.

The animation changes to a scene showing the inside of a reactor. Two nuclear scientists stand on a balcony above it, holding mobile tablets.

Years of research later and we’re still perfecting the recipe as needs and tastes change. Working to calculate the optimum point at which fuel becomes most efficient.

The animation cuts to one of these scientists. It views him behind his left shoulder, showing the mobile tablet. The scientist moves his finger across the screen, changing different pie charts and bar charts on it to signify operating the reactor.

Using predictions helps us to choose our fuel amount and type. When to replace it. Even what materials work in a reactor. Every step relies on nuclear data.

The animation again changes to lines of code moving vertically along the screen. The following text appears as the narrator reads it aloud:

So, how good is this data?

The animation cuts to a man standing indoors, holding a piece of paper. In front of him is a waste basket and behind him are two windows and a clock. The man crumples up the piece of paper, tossing it into the basket.

It’s all based on probabilities – the chance of “this or that” happening in the reactor.

The clock behind him moves forward in time as he tosses more and more crumpled papers into the basket.

Yet this is nuclear energy production. We can’t just leave decisions to chance.

The animation zooms into one of the crumpled papers that has landed on the floor. It flattens out to reveal illustrations with three graphs, labelled “Experiment A,” Experiment B,” and “Experiment C.” Dots appear on the graphs, moving up and down to form trends.

So, we measure the data through experiments. Evaluate it to produce averages.

A blue line appears across all three graphs, indicating an average. The text “Total Average” appears below the graphs.

Run benchmark tests. Determine how “good” it is.

The animation zooms into the graph under “Experiment A,” which shows mass of product versus fission yields (%). Icons appear above each peak on the graph, showing an exclamation point, check mark, and question mark for each.

Looking for uncertainties and improvements.

The animation zooms out of the graph to again reveal the whole piece of paper. The original basket-throwing man appears holding it. He stands between two UK flags.

We collaborate with others internationally.

The man crumples up the paper, tossing off screen to the right. The animation then pans to show a woman standing between two American flags, catching the paper that he tossed. She uncrumples it to see the graphs and gives a thumbs up. She then crumples it up and tosses it offscreen to the left.

Sharing our findings. Because nuclear energy production is complex.

Now, a woman appears to catch the crumpled paper. She stands between two French flags. She also unravels it and gives a thumbs up before crumbling it back up and tossing it offscreen to the right.

Now, a man catches the paper. He stands between two Japanese flags. He also uncrumples it, gives a thumbs up, crumples it back up, and tosses it offscreen to the left.

Modelling what will happen next time. And the time after that.

A woman catches the paper. She stands between two Chinese flags. Like the others, she uncrumples the paper, takes a look, gives a thumbs up, and tosses it offscreen to the right.

It has brought us this far and will continue to help us tomorrow.

A man catches the paper. He stands between two Russian flags and repeats the same process as before, tossing the paper offscreen to the left.

The animation quickly zooms into the paper, now revealing an exaggerated scene of fast-moving highways cutting across every direction on the screen. Oval-shaped icons with the letter “U” move along the highways, representing uranium for nuclear energy.

Not to replace it, but to progress.

Now, small green circles with lightning bolts appear on the highways. They move at different speeds along the “U” icons, representing other clean energy sources.

Just as nuclear energy does alongside other clean energy, becoming the preference over less viable sources.

The animation zooms out to reveal a new scene. The initial chef is standing in front of a light blue background, looking into the camera. She is holding a bowl with the text “Net Zero 2050” on it. She stirs the bowl while smiling.

Helping us perfect our recipe to reach our Net Zero goal by 2050. And helping other sectors, too.

A man appears to the left of the chef. He is wearing a white clinician coat with a stethoscope around his neck.

A man appears to the right of the chef, wearing a hazmat suit, gloves, and face mask.

A man appears to the left of the doctor, wearing an orange construction suit and helmet.

An astronaut appears to the right of the forensics worker, wearing a spacesuit. All five people stand side-by-side, smiling.

Even space. All working toward a better future, supported by nuclear data.

The animation zooms into the astronaut and then rapidly zooms back, showing the astronaut floating in outer space outside Earth and tethered to a spaceship.

Now THERE’S s the lightbulb moment for our planet.

A lightbulb outline appears around the Earth, turning yellow to indicate it’s turned on.

The animation fades to a white background. It shows the Advanced Fuel Cycle Programme logo above the National Nuclear Laboratory and Department for Business, Energy and Industrial Strategy logos. 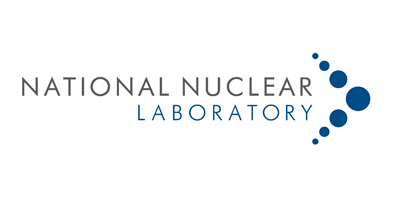